Turns out that despite the inability to go to movie theaters for the majority of this year, my movie watching rate hasn’t been affected as dramatically as I feared! I do sure miss the hell out of those big screens, though.

My three favorite movies I saw in theatrical release in 2015 were:

Yeah, I’m putting Mad Max on there twice. It was that good. This completely unbiased piece pretty much sums up how I feel about it.

Still, the neurotic in me thought it would be a good idea to compile some other stats I was curious about. First, I wanted to know the breakdown of movies seen in a theater vs. other formats:

I want to say there were probably a few more movies I saw on a plane – 2015 was a record year for travel in the continental states – but I just can’t remember. Shoulda kept better records.

END_OF_DOCUMENT_TOKEN_TO_BE_REPLACED

Not counting the reams of comics I was consuming for the first half of the year I read a total of 24 books in 2015. Data for prior years is incomplete but I would guess this approaches a personal record; it’s a decent benchmark but I think I can do better.

Still, I thought it would be interesting to crunch the numbers from a few different perspectives. Firstly I feel like I’ve been reading more books than ever electronically, so I was curious about the ratio of different format types in which I read these books. Here’s how it broke out: 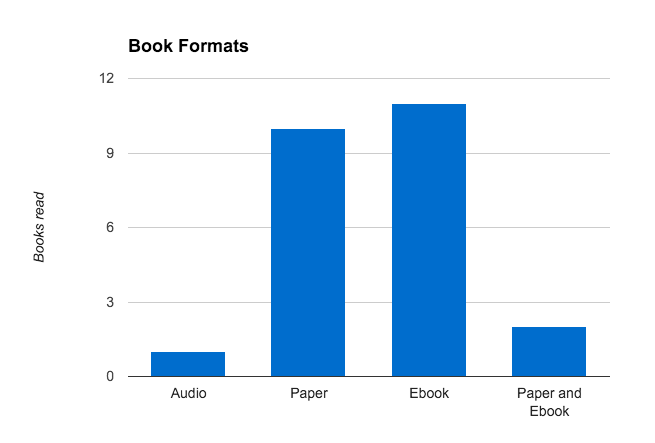 Actually pretty balanced between paper and eBook; I read more physical books than I remembered. Also my lifelong inability to make it through entire audio books continues.

Next, I was sure I read more fiction than nonfiction but I was curious in what percentages. I thought it’d be appropriate to distinguish novels from short story collections as well. 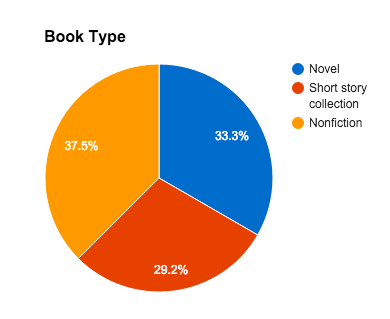 Turns out I was again surprisingly balanced.

Lastly I started noticing that most of my favorite short story writers are female, so I thought I’d just check what percentage of books I read were written by women versus men. 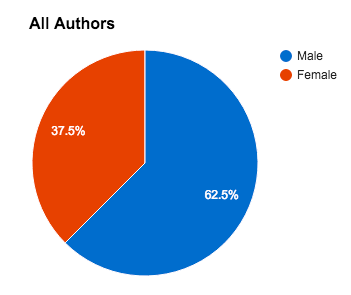 Not quite as high as I’d thought, though limiting the set to just fiction authors brings us closer to 50%. 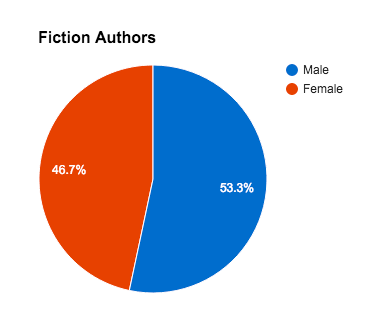 I did a rare thing and got Madden 25 for the Xbox 360 the day it came out this year, seduced by the idea of finally becoming a pro Madden player while my real life Chicago Bears would reach the inevitable Super Bowl championship that awaited them.

Cut to 10 weeks into the season: the actual Chicago Bears are 5-4, having just handed the division over to the Lions (you’re welcome, Detroit), while my virtual Bears haven’t even made it out of preseason. Sigh. 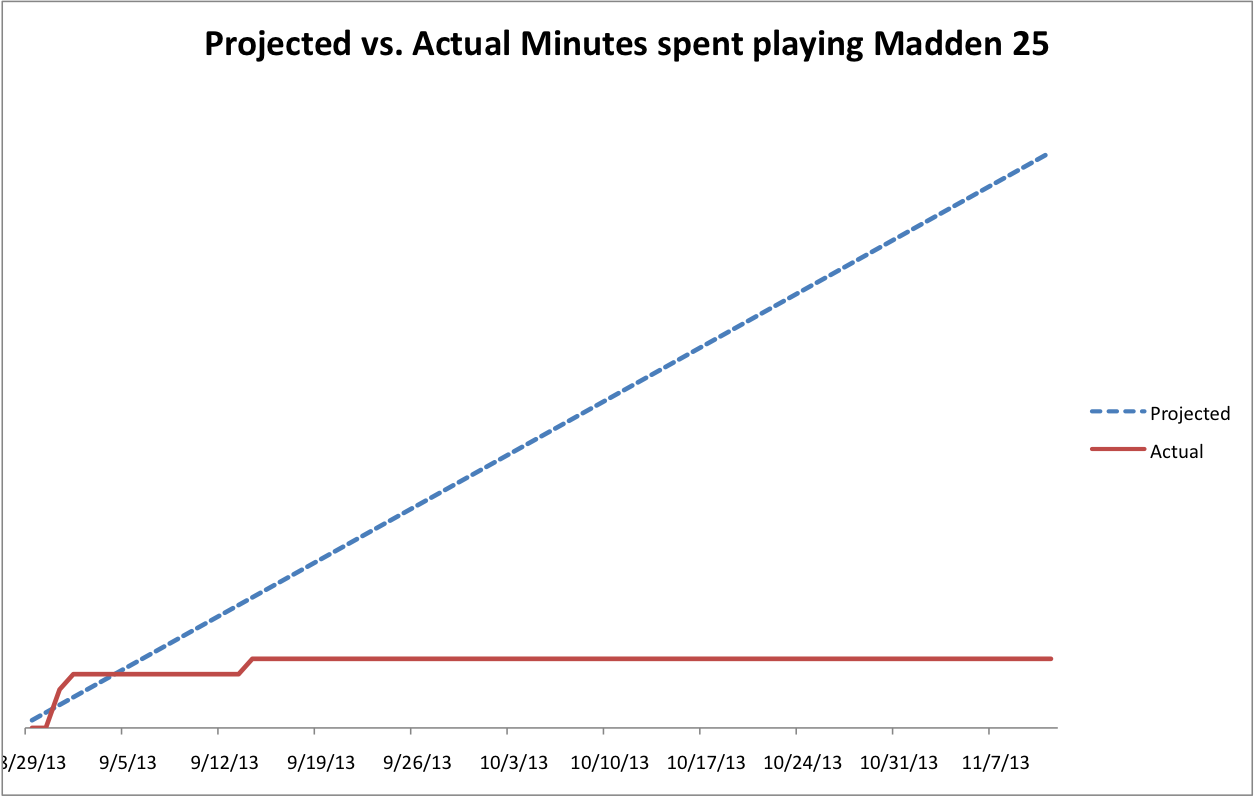 Recently I’ve come across some guideposts that have inspired me to refresh. These are things worth sharing, though some have been around for a while.

– Charlie Kaufman’s screenwriting lecture for BAFTA. Soapboxing to be sure, but I was surprised at how much this moved me and how well thought out some of his arguments are. A reminder to have conviction in art that is honest and different and not too self-aware.

– Michael Lewis’s profile on President Obama. The respectful yet insider-y tone of this piece had me wishing it would last forever. Favorite detail: Obama’s lifehack of removing wardrobe and food choices to avoid decision fatigue.

– Startup is the New Hipster. It’s exactly like that. Actually, all of Liz Fosslien’s infographics are great and inspire me to want to make more of my own. Edward Tufte would be proud. Plus: a Murakami madlib!

– Jenny Holzer’s Truisms. I don’t agree with all of them but that’s really the point: everyone arrives at their own list, their own model of the world. Mine’s just getting started.

Tonight I felt the uncontrollable urge to make a bar chart illustrating my current progress in particular seasons of some shows I’m watching. I blame this behavior on Demetri Martin, Nicholas Felton, XKCD and the ridiculous amount of data I get to sift through at work every day.

The only thing more ridiculous than the existence of this chart is the amount of fun I had making it. Enjoy! 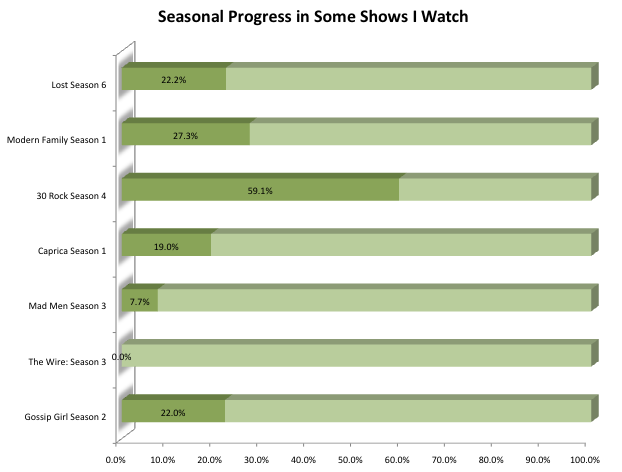 Ok, a few corrections are in order: unfortunately I made it to the gym not 75 times in 2008 but 73.  Woefully short of my target of 100, but I blame the cold December and the ridiculous sickness that had me bed-ridden for 2 weeks (nevermind the pace I was keeping those other 11 months).

On the other hand, I’m most happy to report that I saw 31 movies instead of  the 29 quoted previously.  That still leaves me with a downright unprintable Top 10 Movies of 2008, but hopefully I’ll be able to catch up on a few more contenders as we roll into Oscar season.  And yes, I vow to do better.

A  few more of my favorite things from 2008: Arinell’s Pizza, my work MacBook Pro, Parallels, brunches/TV show plotting with Nicole, dinners with Ben, the primaries, the blogs of Jane and Amanda, any kind of sushi served by anyone anywhere, Chris Paul, Bi-Rite Creamery, that LeBron James commercial for Nike basketball, writing my first spec script for 30 Rock, outings with Rich and his cousins, the new MacBook redesign, lunches at Google, that David Fincher commercial for Nike football, seeing Night of the Living Dead at the Castro with Anthony and Ryan, Hulu.com, pho from Turtle Tower, conducting interviews for LeadersWiki, A Date with Lu Yu, and the genius addition of flashforwards to Lost.

I’ve compiled some preliminary statistics for 2008.  Here’s how it went down:

I've worked in product management for tech companies across a variety of industries. I'm also a writer.