My three favorite movies I saw in theatrical release in 2015 were:

Yeah, I’m putting Mad Max on there twice. It was that good. This completely unbiased piece pretty much sums up how I feel about it.

Still, the neurotic in me thought it would be a good idea to compile some other stats I was curious about. First, I wanted to know the breakdown of movies seen in a theater vs. other formats:

I want to say there were probably a few more movies I saw on a plane – 2015 was a record year for travel in the continental states – but I just can’t remember. Shoulda kept better records.

The Nitehawk is the cinephile’s dream of a movie theater across the street from where I live, so I was curious what percentage of movies I saw there: 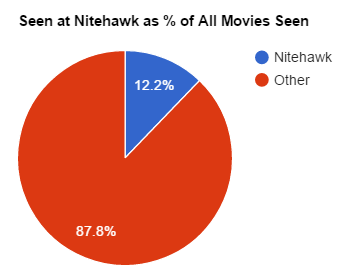 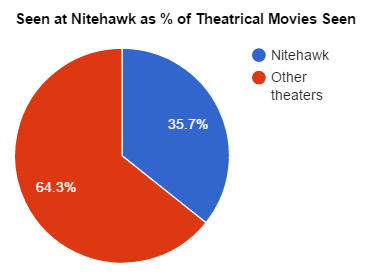 Next, I wanted to know how many movies I watched were repeat viewings (movies I was seeing for the second time or more). This percentage was higher than I expected, so I also wondered how many bucket list movies I was able to cross off in 2015; I’ll (arbitrarily) define a bucket list movie as a critically/culturally acclaimed movie that I’ve wanted to see for a while and was not released in the current year. 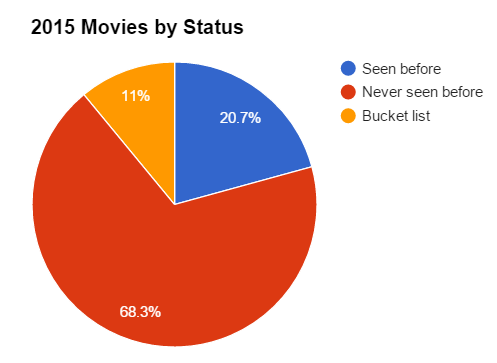 I’ll need to put some more thought into what I think the ideal percentage of rewatched movies is, but I think I can increase my bucket list percentage.

Finally, I have a hypothesis that as time goes on I should theoretically get better at picking movies I’ll enjoy, so I also tallied how many movies of the ones I hadn’t seen before that I would give a thumbs up to: 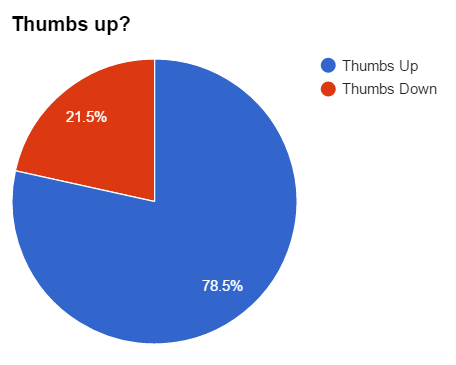 This is fairly imprecise but at least it’ll provide some directional indication of how much of my overall time spent watching movies is enjoyable. I’ll revisit if I can find a better way to measure this.